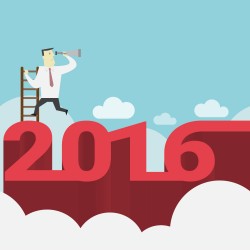 The other day, I was tackling some Christmas shopping when I came across a large display dedicated to 2016 datebooks and planners. It hadn’t dawned on me until that moment that the end of the year is actually approaching.

When I picked up one of the planners it read “2016 is a great year to have a great year,” and just like that, I felt inspired by the coming new year, reflecting on the passing of another. As we all prepare for a fresh start in 2016, here are four ways to enter the new year with a clear head:

Hey, you. Yes, you with the 1,000+ emails stewing in your inbox. Unless you are starring on TLC’s new reality series Hoarding: Buried Beneath Emails, start the new year with a clean slate. Sort relevant emails and conversation threads into folders and leave the rest in 2015 where they belong. When all else fails, refer to Microsoft Office’s four D’s of email management: Delete, Do, Delegate or Defer.

I hope Merriam-Webster will finally list productive, inspirational and energizing as synonyms of cleanliness in 2016. Honestly, though, how many times have you cleaned up your desk and felt like you could conquer the world? Now imagine you have the ability to enjoy that feeling every day going into 2016 – because you do.

As the age-old saying goes, “Those who fail to learn from history are doomed to repeat it.” That might seem a bit extreme in these circumstances, but looking back on the year is a great way to start the new one with a clear head. Identify your peaks and valleys and learn from them.

For 2016, when you put your pen to paper to write your New Year’s resolution, don’t just set goals, set objectives. It is proven to be a more effective goal setting strategy when you define specific actions it takes to reach your goal. It’s one thing to say, “I’m going to start getting to work earlier,” and another to actually devise a how-to plan. For example, get to bed earlier the night before or wake up the first time your alarm sounds.