How Much Should You Spend On PR?

So you’re thinking about hiring a PR firm.

If you’ve gotten this far, you’ve probably already evaluated the costs and benefits of bringing in a PR agency to build your messaging and tell your story, as compared to making an internal hire to do the work.

When you think of it, it’s really a rent versus buy comparison.

Just like making a home or vehicle purchase decision, there are costs and benefits to consider. Do you like the flexibility of being able to move into a cool new neighborhood every couple of years? Or would you prefer the stability of an asset whose value grows over time? Do you like having the newest set of wheels on the street? Or are you the type who enjoys life without a monthly car payment?

The same applies when hiring your PR resources.

Companies often call employees their most important asset – a bit of a misnomer as it implies that the company actually owns that individual. However, just like an asset, companies often make investments in their people in terms of time, training, resources and, of course, money. Depending on the level of staff you hire, that investment can run you $5,000 to $10,000 a month or more.

In return for that investment, you expect the people you hire to be fully committed to your organization – learning, understanding and in the case of a PR professional, advocating for your company or your cause.

However, that commitment may come at a cost. Is your PR team staying abreast of the latest trends or the latest technology available? Do they have the capacity to flex to peak periods of activity, or special situations? Can you rationalize their cost when times are slow and you need to pull back the reins on departmental spending? Probably not.

And that’s where the resources of a public relations firm may make sense. You gain, potentially, global resources: professionals exposed to a variety of industries, technologies, scenarios and even writing styles to which your rank-and-file public relations practitioner may not have access to, since they’re spending so much time looking inward; focusing on your story, your strategies and your technology.

But how much should you spend?

However, prominent research exists that may offer some guidelines as you plan your public relations program.

Outside of those companies where the public relations function reports directly to the president/CEO, public relations most often falls within the marketing function (26%), according to The University of Southern California -Annenberg, in its Communication and Public Relations Generally Accepted Practices Study (2014). 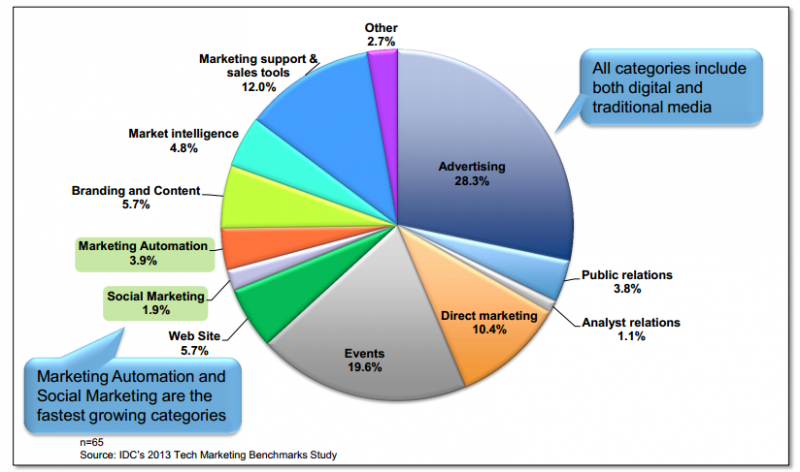 When looking specifically at public relations, the high end of estimates suggest that North American marketers spend, on average 6.5 percent of their budget on public relations initiatives, according to The Holmes Report. On the other side of the spectrum, USC – Annenberg suggests in its 2014 report that PR budgets were .06 percent of gross revenues (2013).

So, in summary, a $1 billion firm can expect to spend between $40 million and $102 million on various marketing activities, with core public relations work consuming between $600,000 and $2.6 million. Using the various numbers described in these reports, below is a snapshot view of what a marketer at a $1 billion company might expect to spend on various marketing and public relations initiatives: